I began, intending to write an essay at the core of which would be Gödel’s Theorem. I imagined it would be a mere pamphlet. But my ideas expanded like a sphere, and soon touched Bach and Escher. It took some time for me to think of making this connection explicit, instead of just letting it be a private motivating force. But finally, I realized that to me, Gödel and Escher and Bach were only shadows cast in different directions y some central solid essence. I tried to reconstruct the central object, and came up with this book.

Achilles (a Greek warrior, the fleetest of foot of all mortals) and a Tortoise are standing together on a dusty runway in the hot sun. Far down the runway, on a tall flagpole, there hangs a large rectangular flag. The flag is solid red, except where a thin ring-shaped hole has been cut out of it, through which one can see the sky.
Achilles: What is that strange flag down at the other end of the track ? It reminds me somehow of a print by my favorite artist, M.C. Escher,. 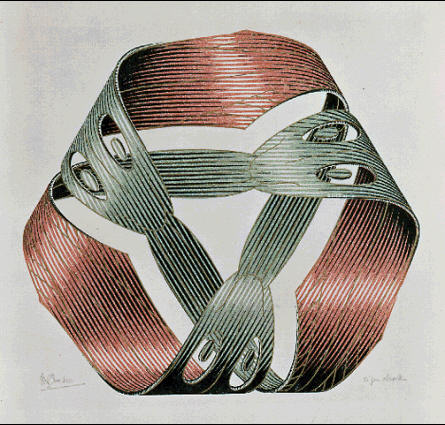 Tortoise : That is Zeno’s flag.
Achilles : Could it be that the hole in it resembles the holes in a Möbius strip Escher once drew ? Something is wrong about that flag, I can tell.
Tortoise : The ring which has been cut from it has the shape of the numeral for zero, which is Zeno’s favorite number.
Achilles : But zero hasn’t been invented yet ! It will only be invented by a Hindu mathematician some millennia hence. And thus, Mr. T., my argument proves that such a flag is impossible.
Tortoise : Your argument is persuasive, Achilles, and I must agree that such a flag is indeed impossible. But it is beautiful anyway, is it not ?
Achilles : Oh, yes, there is no doubt of its beauty.
Tortoise : I wonder if its beauty is related to its impossibility, I don’t know; I’ve never had the time to analyse Beauty. It’s Capitalized Essence; and I never seem to have the time for Capitalized Essences.

Achilles : Speaking of Capitalized Essences, Mr. T, have you ever wondered about the Purpose of Life?
Tortoise : Oh, heavens, no.
Achilles : Haven’t you ever wondered why we are here, or who invented us ?
Tortoise : Oh, that is quite another matter. We are inventions of Zeno (as you will shortly see); and the reason we are here is to have a footrace.
Achilles : A footrace ? How outrageous ! Me, the fleetest of foot of all mortals, versus you, the ploddingest of all plodders ! There can be no point to such a race.
Tortoise : You might give me a head start.
Achilles : It would have to be a huge one.
Tortoise : I don’t object.
Achilles : But I will catch you, sooner or later – most likely sooner.
Tortoise : Not if things go according to Zeno’s paradox, you won’t. Zeno is hoping to use our footrace to show that motion is impossible, you see. It is only in the mind that motion seems possible, according to Zeno. In truth, Motion Is Inherently Impossible. He proves it quite elegantly.
Achilles : Oh ys, it comes back to me now: the famous Zen köan about Zen Master Zeno. As you say, it is very simple indeed.
Tortoise : Zen köan ? Zen Maser? What do you mean ?

Is the wind or is the flag moving ?

Achilles : It goes like this : Two monks were arguing about a flag. One said, “The flag is moving.” The other said, “The wind is moving.” The sixth patriarch, Zeno, happened to be passing by. He told them, “Not the wind, not the flag; mind is moving.”
Tortoise : I am afraid you are a little beffuddled, Achilles. Zeno is no Zen master, far from it. He is, in fact, a Greek philosopher form the town of Elea which lies halfway between points A and B). Centuries hence, he will be celebrated for his paradoxes of motion. In one of those paradoxes, this very footrace between you and me will play a central role.

Achilles : I’m all confused. I remember vividly how I used to repeat over and over the names of the six patriarchs of zen, and I always said, “The sixth patriarch is Zeno, the sixth patriarch is Zeno…” (Suddenly a soft warm breeze picks up). Oh, look, Mr. Tortoise – look at the flag waving ! How I love to watch the ripples shimmer through its soft fabric. And the ring cut out of it is waving, too!
Tortoise : Don’t be silly. The flag is impossible, hence it can’t be waving. The wind is waving.
(At this moment, Zeno happens by)
Zeno : Hallo ! Hulloo ! What’s up ? What’s new ?
Achilles : The flag is moving.
Tortoise : The wind is moving.
Zeno  O Friends, Friends ! Cease yout argumentation ‘! Arrest you vitriolics ! Abandon your discord ! For I shall resolve the issue for you forthwith. Ho ! And on such a fine day !
Achille : This fellow must be playing the fool.
Tortoise : No, wait, Achilles. Let us hear what he has to say. Oh, Unknown Sir, do impart to us your thoughts on this matter.

Zeno : Most willingly. Not the wind, not the flag – neither one is moving, nor is anything moving at all. For I have discovered a great Theorem which states : “Motion Is Inherently Impossible.” And from this Theorem follows an even greater Theorem – Zeno’s Therem : “Motion Unexists.”
Achilles : “Zeno’s Theorem ?” Are you, sir, by any chance, the philosopher Zeno of Elea?
Zeno : I am indeed, Achilles.
Achilles (scratching his head in puzzlement) : Now how did he know my name ?
Zeno : Could I possibly persuade you two to hear me out as to why this is trying to find someone who’ll pay some attention to my closely honed argument. But they’re all hurrying hither and thither, and they don’t have time. You’ve no idea how disheartening it is to meet with refusal agter refusal. Oh, but I’m sorry to burden you with my troubles. I’d just like to ask one thing: Would the two of you humor a silly old philosopher for a few momens – only a few, I promise you – in his eccentric theories ?
Achilles :  Oh, by all means ! Please to illuminate us ! I know I speak for both of us, since my companion, Mr. Tortoise, was only moments ago speaking of you with great veneration – and he mentioned especially your paradoxes. 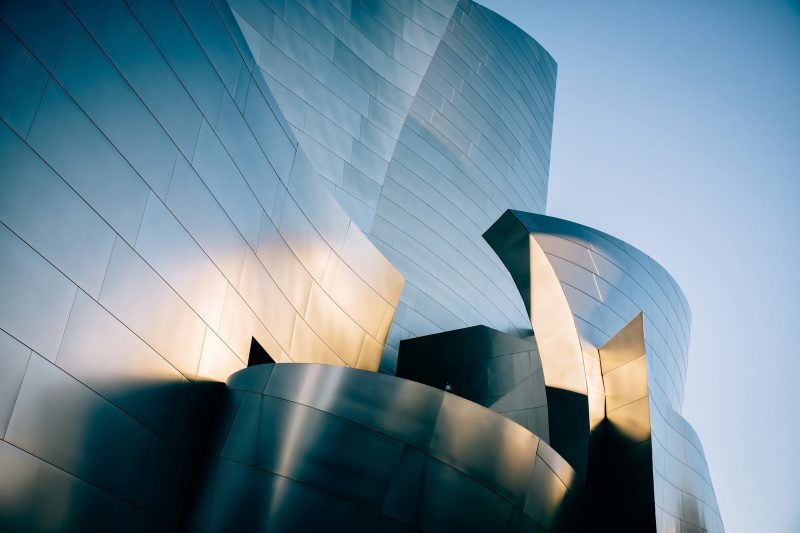 Zeno : Thank you. You see, my Master, the fifth patriarch, taught me that reality is one, immutable, and unchanging; all plurality, change and motion are mere illusion of the senses. Some have mocked his views; but I will show the absurdity of their mockery. My argument is quite simple. I will illustrate it with two characters of my own Invention: Achilles (a Greek warrior, the fleetest of foot of all mortals) and a Tortoise. In my tale, they are persuaded by a passerby to run a footrace down a runway towards a distant flag waving in the breeze. Let us assume that, since the Tortoise is a much slower runner, he gets a head start of, say, ten rods. Now the race begins. In a few bounds, Achilles has reached the spot where the Tortoise started.
Achilles : Hah !
Zeno : And now the Tortoise is but a single rod ahead of Achilles, Within only a moment, Achilles has attained that spot.
Achilles : Ho ho !
Zeno : Yet, in that short moment, the Tortoise has managed to advance a slight amount. In a flash, Achilles covers that distance, too.
Achilles: Hee hee hee!
Zeno : But in that very short flash, the Tortoise has managed to inch ahead by ever so little, and so Achilles is still behind. Now you see that in order for Achilles to catch the Tortoise, this game of “try-to-catch-me” will have to be played an INFINTE number of times – and therefore Achilles can NEVER catch up with the  Tortoise !
Tortoise : Heh heh heh heh !
Achilles : Hmm… hmm…hmm…hmm…hmm… That argument sounds wrong to me. And yet, I can’t quite make out what’s wrong with it.

Zeno : Isn’t a teaser ? It’s my favorite paradox.
Tortoise : Excuse me, Zeno, but I believe your tale illustrates the wrong principle, does it not? You have just told us what will come do be known, centuries hence, as Zeno’s “Achilles paradox”, which shows (ahem!) that Achilles will never catch the Tortoise; but the proof that Motion Is Inherently Impossible (and thence that Motion Unexists) is your “dichotomy paradox”, isn’t that so?
Zeno : Oh, shame on me. Of course, you’re right. That’s the one about how in getting from A to B on has to go halfway first – and of that stretch one has to go halfway, and so on and so forth. But you see, both those paradoxes really have the same flavor. Frankly, I’ve only had one Great Idea – I just exploit it in different ways.
Achilles : I swear, these arguments contain a flaw. I don’t quite see where, but they cannot be correct.
Zeno : You doubt the validity of my paradox ? Why not just try it out ? You see that red flag down there, at the far end of the runway ?
Achilles : The impossible one, based on an Escher print ?
Zeno : Exactly. What do you say to you and Mr. Tortoise racing for it, allowing Mr. T a fair head start of, well, I don’t know –
Tortoise : How about ten rods ?
Zeno : Very good – ten rods.
Achilles : Any time.
Zeno : Excellent ! How exciting ! An empirical test of my rigorously proven Theorem ! Mr. Tortoise, will you position yourself ten rods upwind ?

(The Tortoise moves ten rods closer to the flag. ) 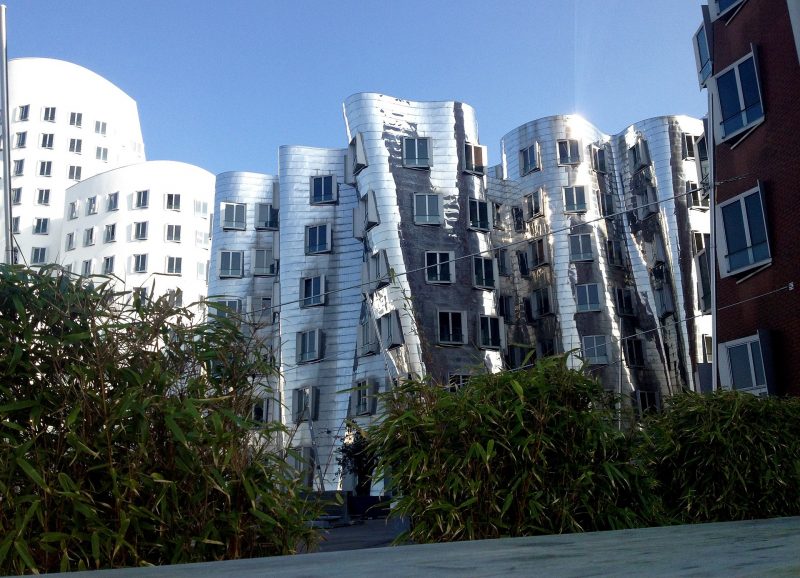